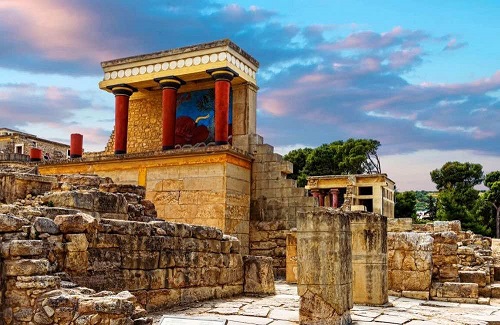 A family day full of mythology and shopping! 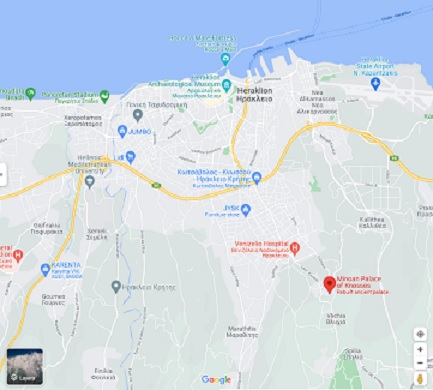 Knossos is the site of the most important and better known palace of Minoan civilization. According to tradition , it was the seat of the legendary king Minos. The Palace is also connected with thilling legends, such as the myth of labyrinth with the Minotaur and the story of Daedalus and Icarus. The site was continyously inhabited from the Neolithic period.

After the partial destruction in 1450 B. C. , knossos was settled by Mycenaeans from the Greek Mainland. The city fliurished again during the Hellenistic period in 67 B. C.. It was captured by the Roman Quintus Caecillus Metelus Creticus.

Knossos was discoved in 1878 by Minos Kalokairinos. Arthur Evans conducted systematic excvations at the site between 1900 and 1931, bring to light the palace, a large section of the Minoan city and the cemeteries. The restorarion of the palace to its present from was carried out by Arthur Evans. The interventions were mostly imposed by the need to preserve the monumnets uncovered.

The Heraklion Archaeological Museum is regarded as one of Europe''s most important museums. The present building was constructed between 1933 and 1937 to plans by P. Karantinos, on the site of the imposing Venetian Franciscan friary destroyed by an earthquake in 1856.

The museum brings together archaeological finds from all over Crete, covering over 5500 years of the island''s history. Pride of place is given to the treasures of Minoan civilisation, the entire historical course of which can thus be appreciated. Justly regarded as the home of Minoan civilisation par excellence, the museum houses the most important collection of Minoan antiquities the world over.

Heraklio is the largest urban centre in Crete with approximately 175,000 people, the capital of the region and the economic centre of the island. The town enjoys of a dynamic and imaginative combination of natural beauty climate, strategic position, cultural heritage and scientific background what has created an appropiate environment to suport a particular mechanism with which to in add value to the broader entrepreneurial activity in the region and stimulate the local economy. Today Heraklion is the top choice for tourist destinations in the Mediterranean thanks to strategic geopolitical position connecting three continents and many different cultures, furthermore the city is also the commercial and scientific centre of the island.

You can call us